Learning from the Past So We Can Be Better in the Future: Considering Representation and ‘Voice’

We began our work delving into the Northcott’s archive last autumn with a team of brilliant interns from the University of Exeter – they uncovered some fascinating and provocative themes from the collection. We will continue our journey looking at these themes with an exploration of the representation of ethnically diverse stories in the archive.

Whose stories have been told? Who is telling them? And where are the gaps?
The theatre’s archive reveals some attempts at telling stories about people with diverse heritages – as well as attempts to address the lack of representation of arts practitioners and communities with diverse heritages including African diaspora people, South, East and South East Asian diaspora people, and recent immigrants to Exeter and Devon.

How have these stories been told and presented? Who is the voice behind the communication and promotion of these works and what role do they have in the way ethnically diverse people’s stories are told?
The way the theatre’s programme is shared and received is documented in detail in the archive through material such as press cuttings, which provide an insight into the viewpoints and interpretations that have been promoted historically.

How do we present and showcase difficult parts of history? Where is the line between cultural appreciation and cultural appropriation? And can theatre entertainment be effective as education/activism?
The role of theatre in addressing diversity and inclusion has also been acknowledged but is generally low on the agenda.

How does some of the material in the archives link with themes/concerns today? And how can we equip researchers and audiences moving forward to create positive change?

Louisa Adjoa Parker, a writer and leader of projects exploring ethnically diverse heritages, chaired a panel looking at how communities with diverse heritages including African diaspora people, South, East and South East Asian diaspora people, and recent immigrants to Exeter and Devon are represented in the theatre’s archive. How has diversity and inclusion been approached historically and what does this legacy mean for anti-racism in the South West today? She is joined by Alix Harris – Artistic Director of Beyond Face and Indra Congress Director, and Sandhya Dave – a well-known cultural champion in Exeter and beyond; a diversity and inclusion specialist leading on anti-racist work across the region and supporting communities with diverse ethnicities.

You can re-watch the panel event now.

I’m looking forward to sharing some of my findings from my research in the archives so far and opening up the conversation around the representation of ethnically diverse people. The conversations we are currently having around ‘race’, anti-racism, decolonisation and the wider inclusion agenda are new and challenging; there is much to consider. I’m excited to delve deeper, particularly considering representation and ‘voice’  – whose stories have been told, by who, when, and how  – and consider how we might learn from the past in order to move into an inclusive future where many voices are not only included, but embedded at the heart of theatre and our beautiful region.

Hello, my name is Latifah and I have been working with the Northcott Theatre Archive for around a month and a half now. My experience with the archive material has been extremely eye-opening in both the content and research process in general.

I have been focusing on the representation of BAME communities within the Northcott Theatre all the way from the Theatre’s opening in 1967 to the late 1990s. Being black and British myself I am particularly interested in this field of research. Theatre unfortunately is still stereotypically considered to be a form of entertainment for affluent white communities. Despite the representation of BAME performers on stage and behind-the-scenes being limited, I feel that it is important for these individuals to be recognised in order to change the existing image of theatre and what it represents. 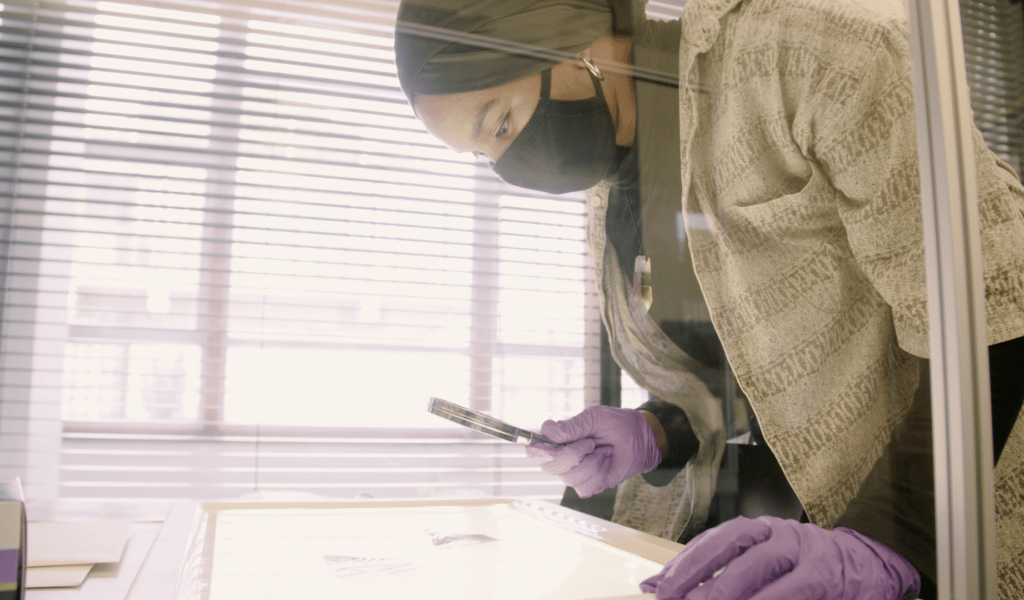 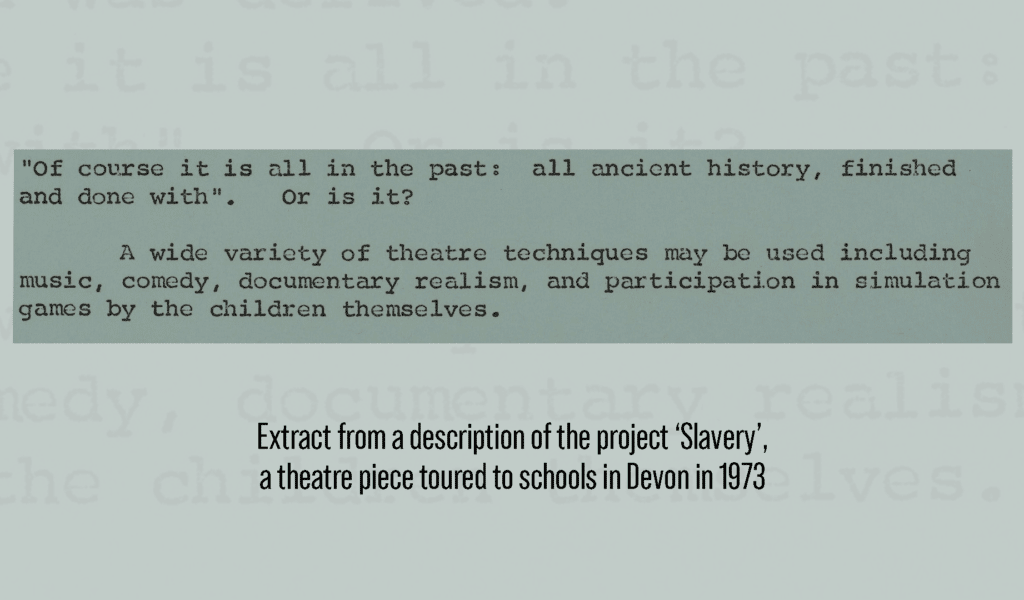 Considering the general lack of diversity in Devon, I didn’t expect to find much representation on the Northcott stage. This was certainly the case during the early days; not only was there no diversity, some productions included racist characters or costume designs. One clear example being Caroline John’s performance as a gollywog in the 1968 production of The Big Noise at Fort Issimo. Considering that this play was aimed at children, and leading figures of Exeter such as the mayor, sheriff and vice chancellor of Exeter University attended, this discovery was especially surprising. I was also particularly struck by the Slavery production that was performed at multiple schools between May and June in 1973. This production was intended to be educational, however I found the images of white actors in blackface, the acrobatics, and use of gollywogs to represent the enslaved deeply disturbing. From testimonials passed on by teachers, the children seemed to have enjoyed the production as a form of entertainment more so than gaining an educational message. Overall, this part of the Northcott Theatre’s history shows the importance of representation when dealing with such sensitive issues.

As I delved into more recent productions in the ’80s and ’90s the representation of BAME performers increased significantly. However, despite actors such as Thomas Baptiste playing major roles such as Othello and the Genie in Aladdin, and Tom Wu as Peter Pan and Shakespeare’s Puck, I still found some issues. When going through the newspaper clippings documenting these productions and reading through reviews, such BAME actors are marketed in an exoticised manner. Primarily with Tom Wu’s role as Peter Pan, the pantomime pushed Wu’s acrobatic skills and his Chinese characteristics as the reason why people should attend. This is a classic form or orientalism, presenting other cultures as exotic for the entertainment of white audiences. Unfortunately, despite the increased number of BAME performers on stage, the types of characters and productions they are included in subject them to orientalist stereotypes. 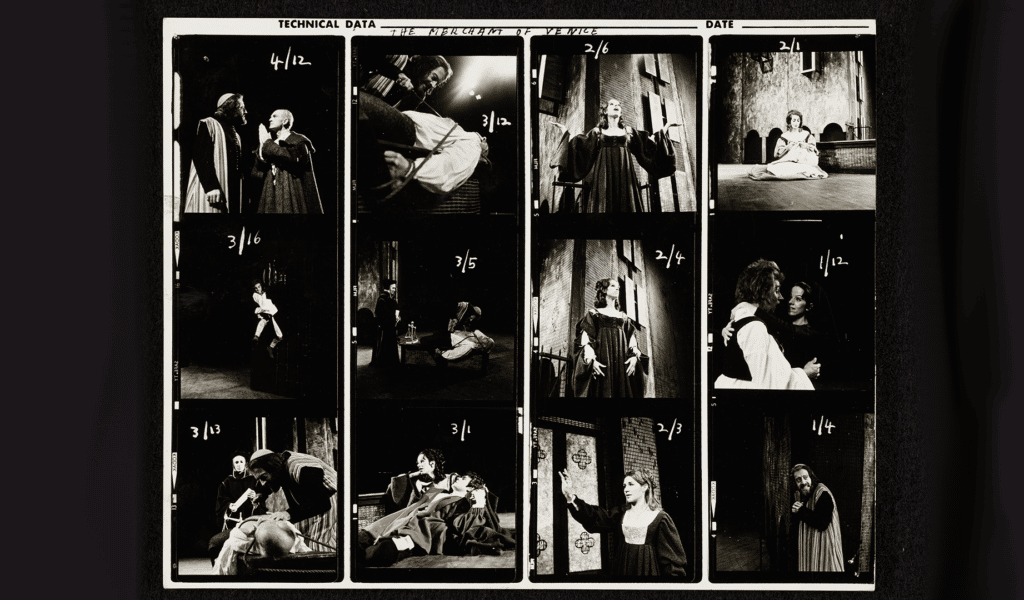 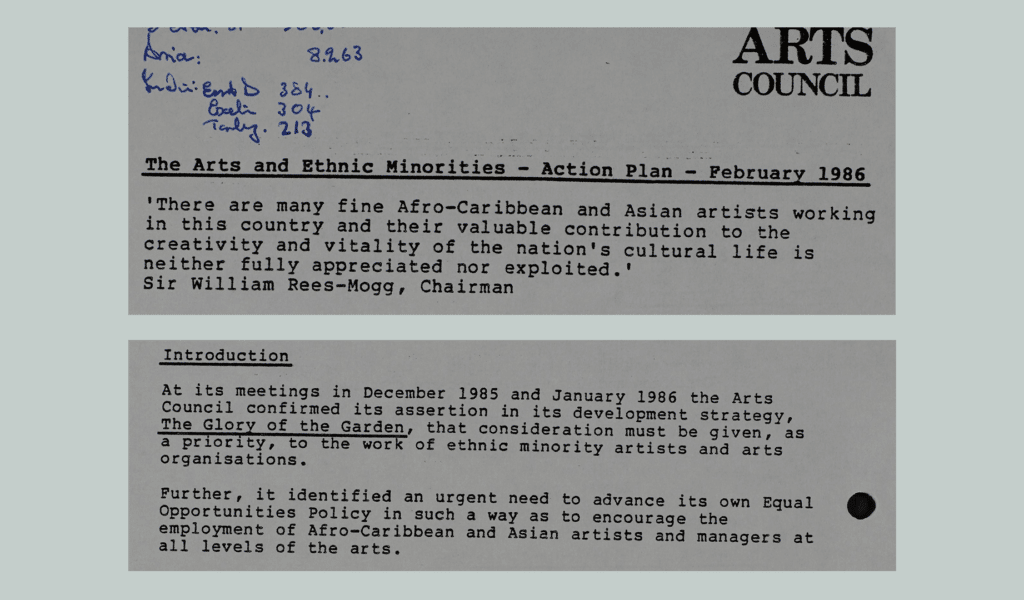 On a practical level, my experience with the archive has been very interesting as well. I was surprised to see such an abundance of different types of documents all well preserved and mostly in good condition. I have primarily been going through the newspaper clippings from each year, finding reviews, interviews and marketing of different productions. During my reading room sessions I go through an extensive amount of material until I find a particular story or production that stands out or had a lot of press at the time. From this I make notes, of key quotes, any controversial language and occasionally photos too. I later add my own analysis to these discoveries trying my best to understand the context of the productions as well as also looking at them from a 2021 perspective. I feel honored to bring the voices of many forgotten BAME members of the theatre to new audiences. This role has been extremely rewarding and I look forward to seeing what I will find in my upcoming sessions.