Dick Whittington – What did you think? 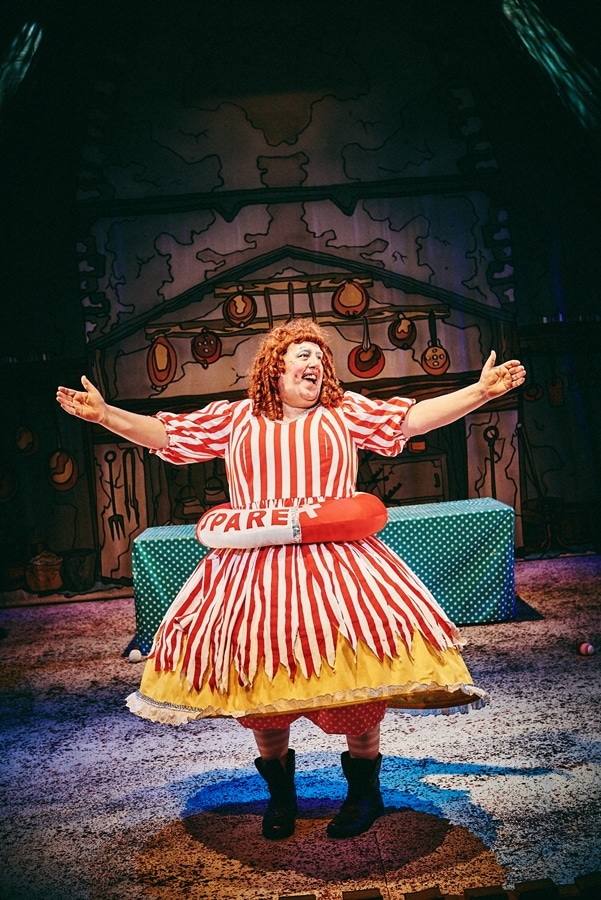 We have rounded up some reviews along with press reports and our favourite audience feedback and tweets – we are so happy that everybody is enjoying the show!

Rosemary Waugh from the Stage came on Tuesday and gave us a lovely review:

★★★★ Review from The Stage: ‘Dick Whittington – a delightful piece of Christmas theatre’

Many of the best pantomimes add local quirks to the festival staples. Tony Lidington’s Dick Whittington for the Exeter Northcott follows this format, making the adventurous hero (Emily Essery) a Devon lad searching for a new job after his ‘grab a granny’ disco in Exeter Quay is condemned by Health and Safety inspectors.

The distinctly West Country notes can be seen elsewhere too. The London Docklands have a notably pirate-like look to them and the energetic Essery woos the aristocratic Alice Fitzwarren (Annabel Warwick) with an accent only found west of Bristol.

It’s the small details throughout that make this a delightful piece of Christmas theatre. Kelly Jago’s hand-drawn set designs have a faintly medieval aspect to them, before morphing into a tropical beach. Costumes are lushly designed, with highlights including Alice’s expansive bloomers.

Along with being lovingly crafted, this pantomime is consistently kind to its audience and is particularly suitable for younger children. Steve Bennett as Dame Sarah Suet banters with the crowd like a kind aunt, cracking jokes about Bake Off soggy bottoms and making vegetable puns.

There’s enough joy here that when the characters board the Megabus home from Plymouth, you wish they’d stay a little longer.

We opened with a preview show on December 2 and asked our first audience what they thought. These four girls were among those who gave it the big thumbs up. To watch the video click here 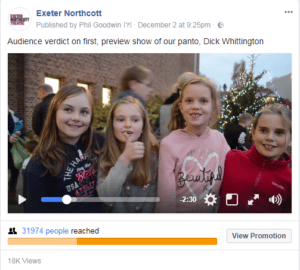 Devon Live came to the Press Night and decided the eight-year wait had been worth it. 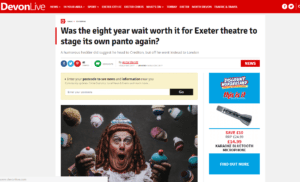 Anita Merritt wrote: ‘Without a doubt this show will get you in the fun, festive mood, and if this is just the start of the return of the Northcott’s pantos I’m already looking forward to what next year might bring.’

During a busy week, Dame Sarah dressed down as simple Steve Bennett and went to BBC radio Devon to chat with Fitz. Here are the pair in the studio just as they went on air. 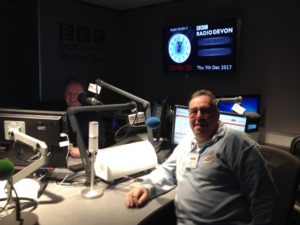 This is what Emily Holyoake from Exeunt magazine said:

‘Dick Whittington is billed as “a traditional family pantomime”, and it’s the perfect antidote to years of mass-produced, pop-song-saturated, Christmas-bonuses-for-celebrities. Instead of buying the rights to ‘Let It Go’ and then shoe-horning it into the plot, or needing to explain why there are Daleks in Aladdin (a low point of one of the Barrowman bonanzas), there are only two things front and centre of Dick Whittington: the people making it, and the people watching it.’

The Fine Times Recorder said the show was a return to to ‘the great days of panto at the Northcott. A terrific show for all the family’

‘There’s general rejoicing at the Northcott, both by the new management team and by audiences.   I saw the show at 10am on a Tuesday, in an auditorium full of school children not quite warmed up to the early hour for a show, half of whom were on coaches stuck in traffic and consequently filed in nearly 30 minutes into the show’

Here are a few comments left by audiences:

‘Funny and warm, and not too embarrassingly interactive, a lovely family panto.

‘A great show.  The grandchildren thoroughly enjoyed it.’

‘Fun performance. Not a big panto fan but really enjoyed this one.’

Three local actors have been given their first professional jobs in the show: Male and female swings Jazz Franklin and Owen Thomas, as well as Annabel Warwick, who plays Alice Fitzwarren.

The Express and Echo wrote a nice piece about them this week: 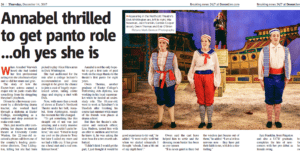 We also gave a debut to this crew of young actors: 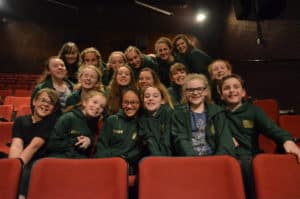 Our set and costume designer, Kelly Jago, made the Western Morning News: 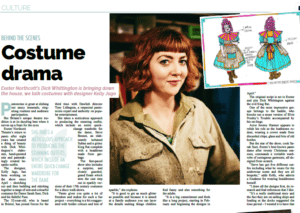 Our next show is on Friday at 7pm then again on Saturday at 2pm and 7pm followed by a Sunday 2pm.