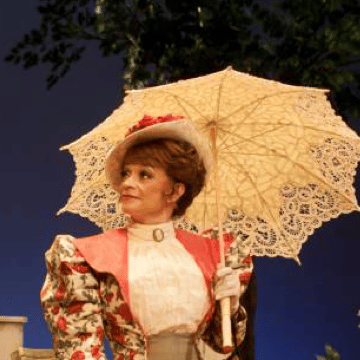 Vivie Warren, a young Cambridge graduate, is horrified to learn that her education and entire luxurious life-style has been financed by her mother’s career in the world’s oldest profession. Due to its frank portrayal of Mrs Warren’s profession, this rarely performed and ground-breaking play was originally banned in England by the Lord Chamberlain.
Written in 1894, it was not allowed a public performance for the next thirty years and during its first performance in New York, the police stopped the play and arrested the cast. The role of Mrs Warren is considered to be one of the greatest female acting roles and this production explores the choices women of the time were forced to make.

Sue Holderness said:
“I’m very excited to be taking Mrs Warren’s Profession on tour to some gorgeous venues. It’s such a terrific play and Mrs Warren is a wonderful character to play. I seem to be type cast as an old tart.”

The cast also includes Emily Woodward as Vivie, Christopher Bowen as Praed, Ryan Saunders as Frank Gardner and Richard Derrington as Reverend Samuel Gardner.
The production is presented by the Everyman Theatre Company and is directed by Paul Milton, the Everyman Theatre’s Creative Director with design by Dawn Allsopp.

Notes to editors
Sue Holderness and Christopher Timothy are available for interviews.
For more information on this production, please visit www.everymantheatre.org.uk