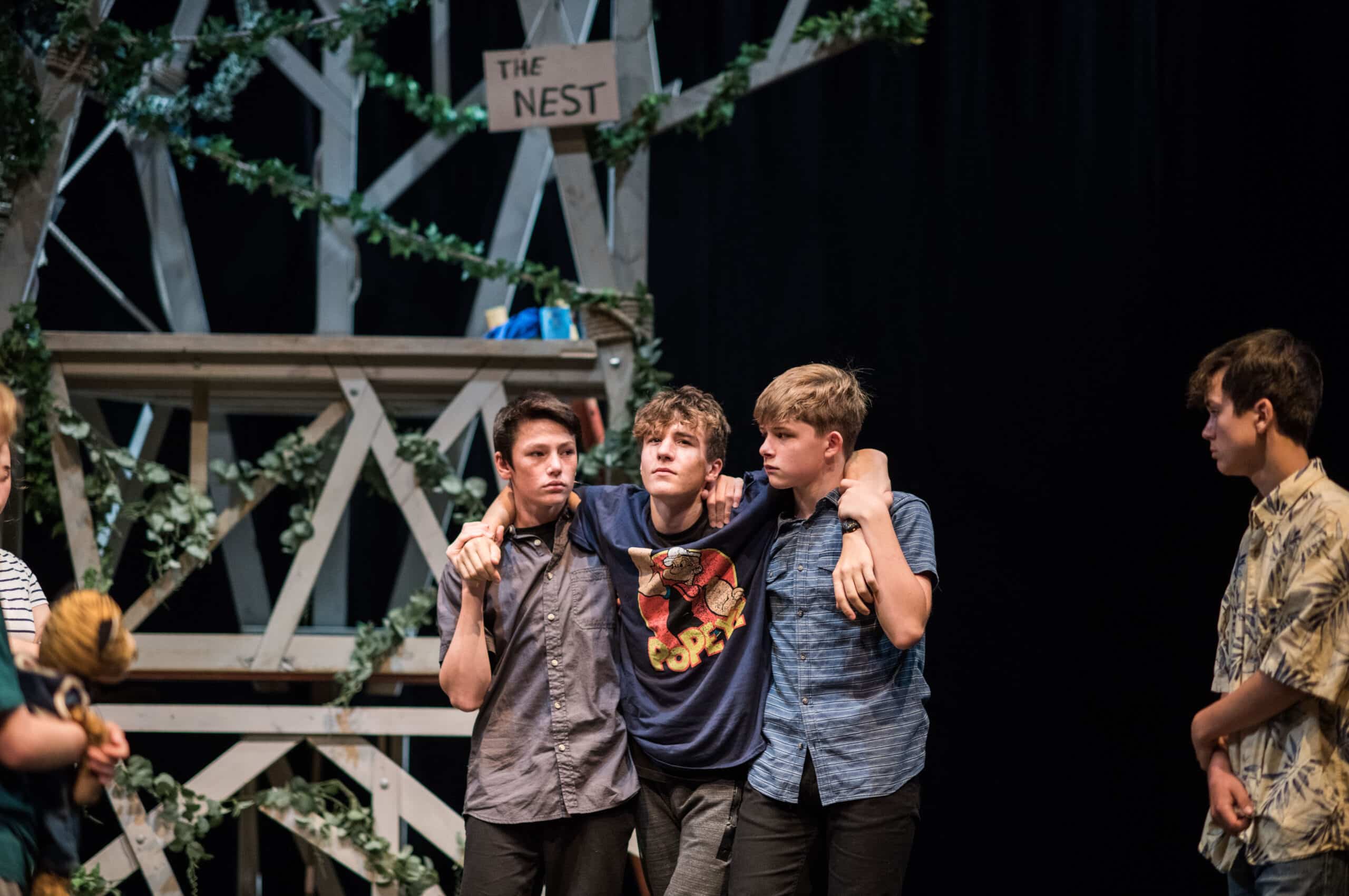 Almost 300 people watched the Northcott Young Company’s world premiere of a celebrated book about a family torn apart by a father’s descent into mental illness.

A cast of 25 young actors aged staged the first dramatization of Mal Peet’s heart-rending book, The Family Tree on 30 & 31 August.

The cast was given a standing ovation on the closing night at the Northcott by an audience of 172 including  the late author’s widow, Elspeth Graham-Peet.

Afterwards, Elspeth said the performance had been a “brilliant” interpretation of the book.

“I thought it was fabulous and I was just so impressed by what they did and I think everyone else that came felt the same way too,” she added.

“I think a lot of people would expect children performing a children’s play but they were so mature.

“They absolutely got the roles and actually seeing children acting like adults made me feel quite ashamed that adults can behave in such a way to put children in these situations.”

Elspeth said Bradley Swinbank’s performance as the father who takes refuge in the treetops had brought back powerful memories of Mal for her son, Tom.

She added: “Even though Bradley was only 16 there were times when he thought he could see his dad in the performance.

“What the cast did as children was to ask questions all the time, talking about how they thought they were feeling. They added to the story and made it their own – they were just brilliant.”

The play was the third in a trilogy of thought-provoking Young Company productions inspired by literary themes and tackling important issues.

It followed earlier shows: an environmentally-themed adaptation of the Rime of the Ancient Mariner in 2017 and last year’s ‘fake news’ interpretation of W H Auden’s famous poem, 1 September 1939.

The powerful novella by the Carnegie Medal-winning author, who died in 2015, tells of a father who builds a tree-house for his son – the Nest – when the family move into a new home.

Everything starts to go wrong when the father suffers a breakdown and takes refuge among the treetops.

Lisa Hudson, the Northcott’s Creative Learning Manager, said the story was an incredibly powerful subject for the young actors to explore.

“The Family Tree is by quite some way the biggest and most ambitious project the Young Company have embarked on so far.

“I was once again blown away by the dedication, talent and energy of this amazing group of young people. They took a story which has very grown-up and complex themes and they just understood them and supported each other to create a piece of theatre which was sensitive and tender.”

The whole company were so deserving of the standing ovation they received at the final performance. I can’t wait to work with this remarkable group again soon.”

The novella was illustrated by Greenaway-longlisted artist Emma Shoard and published in 2018 by Barrington Stoke.

To mark the first stage adaptation, Emma created a giant mural inspired by the original artwork on the outside of the Northcott with help from the cast.

The Young Company was relaunched in 2017 after several years without any children’s theatre and has now grown to three Saturday groups as well as week-long residencies throughout the year.

The groups give aspiring actors a taste of professional theatre – but the philosophy of a caring collective runs much deeper than useful stage skills.

Local actor and director Conor Magee adapted the story for the stage and, alongside Lisa, co-directed the show.

Conor said: “The production of Family Tree at the Northcott represented the happy coming together of superb material in the form of Mal Peet’s elegant and evocative book, a talented cast and the total involvement and commitment of  everyone at ENT.

“It was an honour to be associated with this deeply moving piece.”