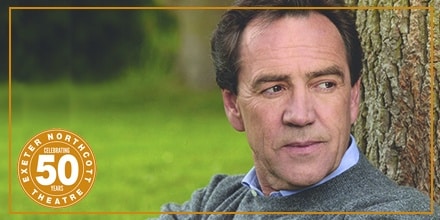 Exeter Northcott Theatre is delighted to announce that acclaimed actor Robert Lindsay will perform in its 50th anniversary gala in November.

Robert is an Olivier-winning actor known for his acclaimed performances both on and off screen, including appearances with the Royal Shakespeare Company, as well his role as the hapless dentist Ben Harper in BBC’s My Family.

Robert Lindsay was part of the Exeter Northcott’s Rep Company during the early 1970s, alongside Brian Protheroe, John Nettles and Geraldine James.  His Northcott career was particularly prolific, performing in a wide variety of shows which ranged from musical theatre (The Boyfriend, Guys & Dolls) to Shakespeare (Julius Caesar, Taming of the Shrew) to farce (A Flea in her Ear) to period drama (Three Sisters, Roses of Eyam) to political epic theatre (Narrow Road to the North, Caucasian Chalk Circle).  He also served as fight choreographer in The Fair Maid of the West (1971) and appeared in the controversial adaptation of Measure for Measure created by playwright Howard Brenton for the Northcott in 1972.

The anniversary gala will take place on Sunday 12th November 2017. The evening will celebrate the Exeter Northcott Theatre’s first 50 years and will raise funds to help strengthen the foundations for the next 50. Dame Judi Dench was recently announced as Patron of the Gala.

With more performers will be announced in due course, tickets for the gala are on sale and can be bought online at www.exeternorthcott.co.uk or through the theatre’s Box Office on 01392 726363.

Artists announced as performing are subject to professional availability.