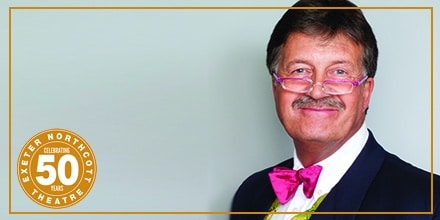 Best known for presenting BBC One’s Bargain Hunt, Tim will be the auctioneer at the 50th anniversary gala auction where audience members can bid on some exciting prizes yet to be announced.

Tim Wonnacott first started appearing regularly on television in the early 1990’s on the BBC Antiques Roadshow. Subsequently he became a regular expert on a number of BBC antiques shows including The Great Antiques Hunt, Going Going Gone, Put Your Money Where Your Mouth Is, and The Antiques Show. He has written a book entitled, Tim Wonnacott’s Money-making Antiques for the Future, published in 2004 by Virgin Books. Tim lectures on a wide variety of subjects relating to Art, Antiques and History for corporate clients, including the Cruise and Leisure industry.

In an unusual departure from his “Antiques” comfort zone, the icing on what turned out to be a vintage 2014 year for Tim was his appearance on BBC One’s Strictly Come Dancing, reaching week four with dance partner Natalie Lowe.

The anniversary gala will take place on Sunday 12th November 2017. Robert Lindsay, Joe Stilgoe and Paul Jesson are on the line up with more names yet to be announced. The evening will celebrate the Exeter Northcott Theatre’s first 50 years and will raise funds to help strengthen the foundations for the next 50. Dame Judi Dench was recently announced as Patron of the Gala.

With more performers to be announced in due course, tickets for the gala are on sale and can be bought online at www.exeternorthcott.co.uk or through the theatre’s Box Office on 01392 726363.

Artists announced as performing are subject to professional availability.