It’s been clear to us in the last 18 months that successive Covid lockdowns have pushed storytelling and performance off stage and online, and that young people have been leading the way by using digital technology and social media to reach new audiences and tell their stories.

So earlier this year we put a callout for emerging young film makers to tell us about a project which said something about the change they want to see in the world.

We had many applicants and were delighted to select 16-year-old film-maker Ralph Hutchins. Ralph was given the equivalent of £500 of support from professional film-maker Luke Jeffery of award-winning film and theatre company Wandering Tiger. With Luke’s mentoring, Ralph developed his short film The Kickabout, which explores the impact of lockdown on young people, both physically and in terms of their mental health.

Ralph had to overcome challenges of writing, directing and filming The Kickabout during a lockdown and whilst completing his GCSEs.

We are delighted to share the fantastic results here. 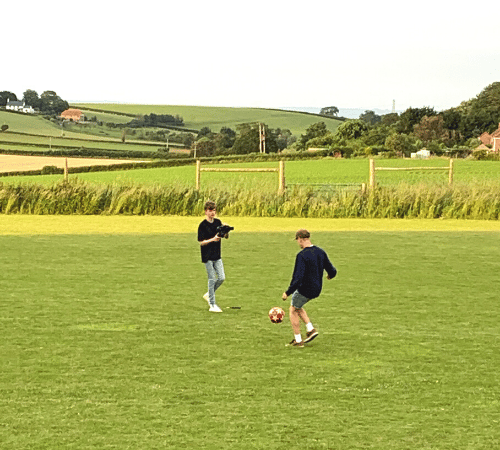 Making the film has been an incredible opportunity and I really enjoyed working with Luke and Lisa. Working with Luke was great, and I learned so much from him that I can take forward. After filming I learned that the time I spent with my friends was rare and precious and I’ll always be thankful to the Northcott theatre for giving me the opportunity to do it with them.

It’s been fantastic to see Ralph’s project develop from the initial idea to the final edited film. I’ve thoroughly enjoyed our regular Zoom meetings and working through the various stages of the production process with him. This film was created in challenging circumstances, and Ralph has come up with some really imaginative solutions to the problems he faced along the way.

We were so impressed from the very start with Ralph’s ideas and creative vision for his film. Ralph had already built up a body of work, filmed at home and with friends in his local community, so it was a pleasure to be able to offer him the opportunity to hone his skills by working with professional film maker Luke Jeffery. Shining a light on the impact of Covid on young people’s mental health is so crucial and Ralph has done this creatively and sensitively.