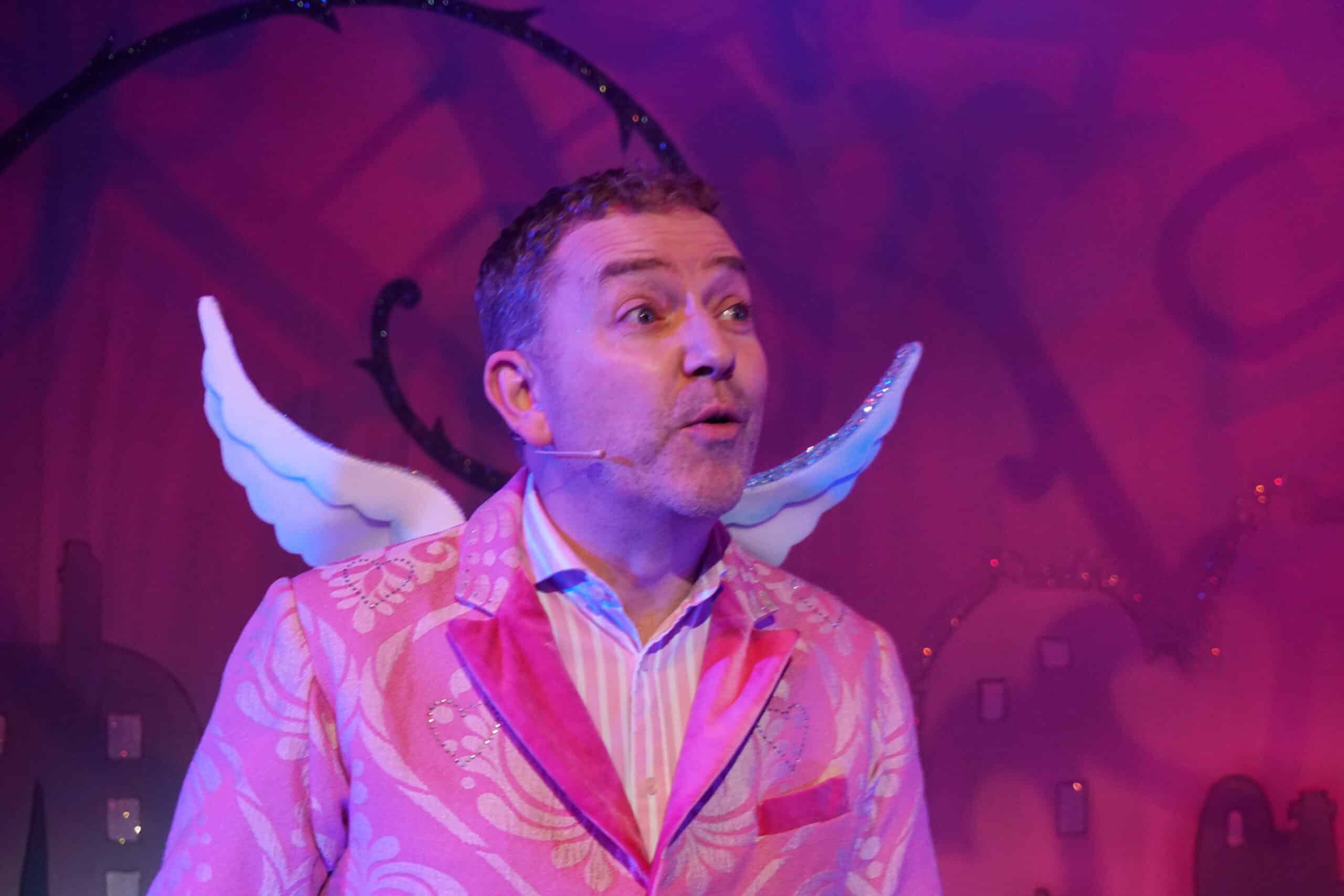 Exeter Northcott Theatre’s Artistic Director and Chief Executive donned a pink suit, beret and angel wings to save the day after one of the stars of his pantomime was struck down by illness.

Daniel Buckroyd stepped in at the last-minute to play Cupid at the Press Night performance of Beauty and the Beast on Wednesday (December 4).

With usual actor Dafydd Lansley too unwell to perform, Buckroyd stepped up to the plate to perform the pivotal role of the show’s matchmaker.

He said: “This is the beauty of live theatre – anything can happen and we all pull together to ensure the show goes on.

“This morning I was in a management meeting and now I’m dusting off the angel wings ready to go on stage.”

“We have a fantastic cast and creative team and we’ve been delighted with the audience response so far.  There’s nothing like panto for bringing people together and getting into the Christmas spirit.”

Buckroyd wrote and directed the ambitious new production of the classic love story of a handsome prince who is transformed into a hideous beast and can only be saved by “true love’s kiss”.

It is the first time the story has been staged at the theatre.

The production follows the fortunes of Belle, the most beautiful girl in Paris, played by Sarah Moss, who appeared in Trevor Nunn’s West End production of The Lion in Winter.

Playing Prince Valentin is Samson Ajewole, who made his West End debut in the hugely popular The Comedy about a Bank Robbery.

Steve made his Northcott debut more than 30 years ago playing Philip Welsh in Terrance Rattigan’s The Deep Blue Sea and is known to TV viewers as PC Bob Daniels in Broadchurch.

Anna Stolli, who appeared in the West End production of Kinky Boots and toured internationally with Mamma Mia!, plays the evil enchantress, Nightshade.

Belle’s sister Soufflé is played by Francesca Pim, who appeared in the UK tours of Alice in Wonderland and Salad Days.

Cupid is played by Dafydd Lansley, whose theatre work includes Annie Get Your Gun an international tour of A Midsummer Night’s Dream.

Sebastian Rasmussen, a dancer in Mamma Mia 2 – Here We Go Again, and Hollie Nelson, a singer and dancer in Sherlock Holmes – the Musical, appear as the male and female understudies.

The Northcott earned a reputation for home-grown Christmas pantomime until 2010, reviving the tradition again in 2017 with Dick Whittington and last year with Jack and the Beanstalk.

The show has been used to launch a new initiative, which has raised more than £8,000 to give ticket to families who would otherwise not be able to come to the production.

The Pay it Forward campaign was launched by Sir Ian McKellen when he brought his one-man 80th birthday tour to the Northcott and shook the first bucket on stage back in July.

Since then, 1,500 people have donated, allowing the Northcott to give away 1,000 Beauty and the Beast tickets to the community via local charities, such as Live West, Devon Foster Families and Home Start.