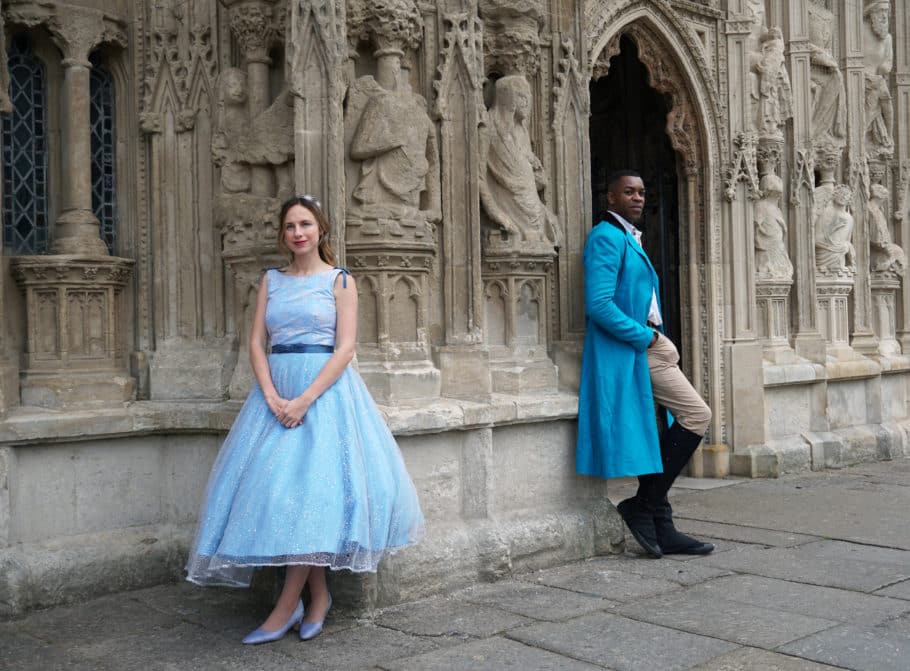 Shoppers and city centre visitors will be able to watch a professional cast rehearse a Christmas pantomime after Exeter Northcott Theatre took over a prominent space.

Rehearsals get under way on Monday (11th) for Beauty and the Beast, which opens on 30 November.

It is the first ever staging by the Northcott of the classic story of a handsome prince who is transformed into a hideous beast and can only be saved by “true love’s kiss”.

For the first time, a cast, including Exeter’s best known panto star Steve Bennett, will be put through their paces in a new rehearsal space on Paris Street.

Every day except Sunday, screens at Make Tank will be rolled back between 3 and 4pm, giving passers by the chance to watch the nine-strong troupe at work.

Artistic Director and Chief Executive Daniel Buckroyd said: “I‘m a huge fan of pantomime – the drama, the music, the silly jokes, the theatrical magic – and I love the way it can bring families and friends together at Christmas – so I’m thrilled to be continuing the tradition of great Northcott pantos with Beauty and the Beast”.

“We are delighted to be able to put this new show together in the heart of the city and hope the public will enjoy catching a glimpse of how we go about it.”

The Northcott earned a reputation for home-grown Christmas pantomime until 2010, reviving the tradition again in 2017 with Dick Whittington and last year with Jack and the Beanstalk.

The scheme hit its ambitious target last week, giving away 1,000 panto tickets to people who would not otherwise be able to go to see the show.

The production follows the fortunes of Belle, the most beautiful girl in Paris, played by Sarah Moss, who appeared in Trevor Nunn’s West End production of The Lion in Winter.

Playing Prince Valentin is Samson Ajewole, who has played roles in La Cage Aux Folles and The Comedy about a Bank Robbery in the West End, while Exeter favourite Steve Bennett returns to the Northcott stage for his 22nd professional pantomime, playing Belle’s father, Monsieur Marzipan.

Anna Stolli, who appeared in the West End production of Kinky Boots and toured internationally with Mamma Mia!, plays the evil enchantress, Nightshade.

Belle’s sister Soufflé is played by Francesca Pim, who appeared in the UK tours of Alice in Wonderland and Salad Days.

Cupid is played by Dafydd Lansley, whose theatre work includes Annie Get Your Gun an international tour of A Midsummer Night’s Dream.

Sebastian Rasmussen, a dancer in Mamma Mia 2 – Here We Go Again, and Hollie Nelson, a singer and dancer in Sherlock Holmes – the Musical, appear as the male and female understudies.

The show opens on 30 November and runs until January 5.

Read about the show and book tickets here.